During every World Cup, my mind would invariably wander back to previous World Cups, and in particular to the one in 1990 in Italy, as it was my very first World Cup, and in fact, was the very first time that I actually started watching football. For some reason, I never paid attention to football before that, even though I had by then lived in the Netherlands for one-and-a-half years, and that we were living in a golden age of Dutch football (PSV 1988, Euro 1988, AC Milan 1989-1990, FC Barcelona 1992). This is the tournament that introduced me to the beautiful game. Of course, the overwhelming opinion is that the games were not particularly beautiful during that tournament, with a lot of defensive tactics and bookings, and is generally regarded as the most boring World Cup ever. But tell that to a 11-year-old who had never been exposed to football before. For me, Italia 1990 will always retain a certain mystique, and the way I experienced it is totally different than the way I experience football in the future.

As it is now exactly 20 years since that tournament, I thought it would be nice to recap some of my fondest (and some not so fond) memories (thanks to YouTube for refreshing my memory on many of these moments). These moments may not all be necessarily the most famous or most distinguishing moments during the tournament, but rather what jumps to my mind when someone mentions Italia 1990 to me (for instance, Gazza’s tears after the semi-final is not in, because I have no actual recollection of seeing it live). So without further ado, and in no particular order:

Group F – Drawing of lots necessary to determine the standings

For the first time in World Cup history, the drawing of lots was necessary to distinguish between two teams during the group phase because of identical results, in this case the Netherlands and Ireland. But this was not what made this moment so memorable. Going into the last match, all the previous had ended up in draws, with every team having scored and conceded 1 goal each. If Egypt had been able to score the equalizer against England in their final match, all four teams would have ended up with identical results! Now, that would have been truly historic!

It’s not a big surprise of course, that this moment made it onto the list. The thing I remember most is how casual Rijkaard actually looked and acted while he was spitting in Völler’s hair, like it was something he did every day. And of course, this moment also delivered one of the most iconic photos in football history. 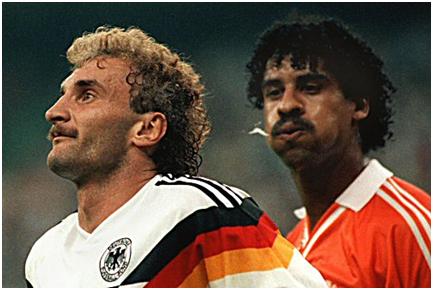 No recap of Italia 1990 would be complete without mentioning Cameroon of course. They were led by Roger Milla, who scored 4 goals as a 38-year old during the tournament, and were the first African nation to reach the quarter-final stage ever. They shocked the world by defeating defending champions Argentina during the opening match, even as they ended the match with 9 players. This was supposed to be the great breakthrough for Africa, but only 2 other African nations have been able to reach the quarter-finals in the next five World Cups (Senegal in 2002 and Ghana in 2010). And Cameroon? They never even managed to reach the second round again…

Ah Higuita, how you have entertained us throughout your career. This is one of his most notorious mistakes, trying to outplay Milla more than 30 meters away from his goal. The funniest of this all was his desperate attempt to hack Milla just before he shoved the ball into the empty net.

Every World Cup, I proclaim Argentina to be one of the heavy favorites, but this was the last World Cup when they even passed the quarter-final. My preference for the Argentinian national team probably originates from this tournament, but to be honest I have no idea why. They played horribly most of the time, and Maradona was nowhere near his 1986 form, except for some flashes. In fact, they probably didn’t deserve to reach the final at all. They lost to Cameroon in the first match, and actually finished third in their group behind Cameroon and Romania. They got their ass kicked by Brazil in the second round, but managed to win 1-0, and they would reach the final due to two penalty shoot-outs.

But two players, who would both start the tournament as reserves, would excel and push Argentina toward the final: Claudio Caniggia and Sergio Goycohea, and they would eventually become my favorite player and keeper respectively of the tournament. Caniggia scored some crucial goals against Brazil and Italy, but it was during the opening match where I would fall in love with this player due to a incredible dribble before being hacked by Massing. Goycochea would turn out to be the best goalkeeper of the tournament, stopping lots of penalties along the way.

Now for a moment that probably not a lot of people will remember. I remember watching this match, fervently rooting for the South Koreans just because they were Asian. Of course, Asian teams were just not very good at that time, and they wouldn’t gain a single point durng the tournament. But there was one glorious moment in this match which gave us hope for a brief moment, when Kwan Hwang-Bo scored a blistering free kick to put the score at 1-1. Alas, Spain would go on to win with 3-1.

May be the single funniest moment during the World Cup in 1990, and that’s saying a lot considering some of the other crazy stuff that happened. This one occurred in the final between Germany and Argentina, which the Germans would win with 1-0. This actually was one of the crucial moments during the match as Argentina would earn a red card (though the Germans were much stronger anyway). To be fair, it was a genuine foul more than deserving of a red card, but the way Klinsmann followed through on his initial fall was just hilarious. Just watch the video.

Well, this has technically nothing to do with the World Cup itself, but this was my absolutely favorite Panini sticker album I ever had (Panini sticker albums were a craze amongst kids in Singapore at the time), and it was my bible for the World Cup. It contained a wealth of information, and I would still read it regularly a few years after the tournament had ended. It not only increased my factual knowledge for football, but is also increased my linguistic and geographical knowledge. Thanks to this album, I learned that Suomi is related to Finland, Hellas to Greece, Helvetia to Switzerland, and Magyar to Hungary. Not only that, thanks to reading through all the players’ names hundreds of times, it helped me to develop the skill to recognize certain nuances in different languages, a skill I further developed through the studying of the names of players and clubs.